A legendary mayor of Haapsalu Hans Otto August Alver was born in Valga on April 11, 1887.

He studied at Valga basic school and later in gymnasium in Pärnu. After graduating from the gymnasium in 1907 he entered the medical faculty of the University of Tartu. He was awarded the doctor’s diploma in 1918. During the First World War he was a doctor in the Russian army. After graduating from the university, Dr Alver went to Läänemaa and became an independent practicing doctor in Lihula (1918-1919). He participated in the Estonian War of Independence as a senior doctor in the ranks of Kuperjanov Battalion.

After the war, he returned to Läänemaa where he was elected a county doctor in 1920. He continued in this office until 1931, simultaneously being a head of the Lääne county hospital for some shorter periods. In 1921, Dr Alver was elected to the Municipal Council of Haapsalu. In the same year, ‘The Society of Decorating Haapsalu’ was created on his initiative. 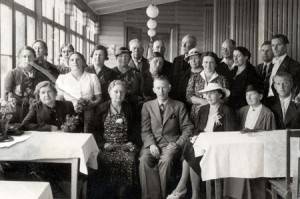 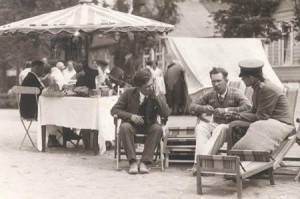 At the end of the twenties, people of Haapsalu were not satisfied with their councilors. Flipping through copies of Lääne Elu of 1928-1929, you can see great contradictions between the municipal council and the government.

The Municipal Government had quite a long list of sins. Almost every meeting in the town hall was sharply reflected in the paper.

Alver, well known for his democratic views, energy and ability to organise, was criticised several times by leading officials and their supporters (however not in Lääne Elu). In the municipal council he was the most remarkable figure of the so-called opposition.

The newspaper Läänemaa (which was the mouthpiece of the municipal government) tried to criticize Alver. The following doctor’s response in Lääne Elu should characterize his views well enough:  ‘And, quo vadis – where do you go, Alver? I walk along my former, straight and simple path towards better future, which will and must come at the latest for our children, despite the opponents. And therefore, I fight as much as I can against inferior elements, who are dangerous to our town and fatherland.’

At the end of July 1929, a need arose for a new mayor and the viable opposition in the municipal council was able to successfully solve the crisis situation. There was a unanimous consent about the mayor – Hans Alver.
On August 26, 1929, new officials had started work and Alver had to manage ‘the orphans court, firefighting business, the resort, parks and boulevards, education and the town’s general affairs.’ (LE, August 31, 1929, vol. 35.)

From now on the municipal government was not criticized in the press. It is likely that things became better in the town hall. And that really appeared to be the case as the coming years were extremely successful for Haapsalu.

What they could do!

Despite of the scanty budget, a lot was achieved: the installation of municipal water supply and paving streets was started. Alver considered the construction of sewage extremely important, predicting exactly how the town’s wastewater could potentially change the surrounding bays from a resort into sources of infection within 50 years.

On Alver’s initiative, boulevards were established, the creation of the Africa beach started, the town decorated etc.

Simultaneously, Alver participated in resort-related events in Europe and even in America, learning everything remarkable and attempting to apply it here to the extent permitted by the limited conditions.

It was beneficial to Haapsalu that the mayor was a doctor with well-rounded education. His deep interest in the local history also stimulated his alert spirit.

In 1929, on Alver’s initiative, the Society of the Museum of Läänemaa was founded. The older and more valuable properties of the current Museum of Läänemaa, historical objects, characteristic to this region were collected during these times.

The town could be really proud of their ‘first citizen’. High-ranking officials from the capital often said: ‘You have no problems. You have Alver!’

The 9th of April 1932 issue of Lääne Elu asked why Haapsalu was glorified so much. The response was: ‘Evidently because the former filthy town of fishermen has changed into a cultural holiday making town. And if we ask, who has moved the divining rod, the answer is that Dr Alver has made a major self-sacrifice.’

That was how his co-inhabitants saw the mayor. He was honored and his wide smile, optimism and fantasy were admired.

Unfortunately, then came an end to his glorious time as a mayor. On June 14, 1941 the Alver family was deported. Hans Alver died in the Urals on November 23, 1943.